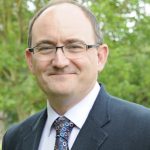 Stephen Parker is Professor of the History of Religion and Education at the University of Worcester. His PhD, published as Faith on the Home Front (2005), focused upon an oral history of popular religion during the Second World War, and documented the role of churches during the blitz. Stephen authored and co-edited a further volume on religion and warfare entitled: God and War: the Church of England and armed conflict in the twentieth century (2012). He is senior editor of the Peter Lang series on Religion, Education and Values and is contributing editor to the Bloomsbury Reader in Religion and Childhood. (2017). He has published widely on the history of religious education in the twentieth-century. Stephen is a Fellow of the Royal Historical Society and of the Royal Society for Arts, a Member of the International Seminar on Religious Education and Values, and Editor of the Journal of Beliefs and Values: studies in religion and education. Stephen has recently led a Leverhulme Trust for a Research Project Grant to investigate a project entitled ‘Faith on the Air: a religious educational broadcasting history, c. 1922-present’ (funded 2014-2017) for which OUP have contracted a monograph, to be published in 2018.