Music played little part in the education of British children before 1853 when Edward Thring was appointed headmaster of Uppingham School in the English Midlands. Thring created an innovative holistic curriculum for the two dozen boys of this rural day and boarding school and in 1855 he appointed a musician as the third addition to his staff to form a teaching team of five; by the time of Thring’s death in 1887 and a school roll now three hundred, the full-time music team numbered six. Almost all came from Prussia: early appointments stayed only a year or two but later ones, including Paul David—”Music and Choir Master”—made Uppingham their permanent home. Over the course of four decades, David—a member of the Mendelssohn and Schumann circle, and friend of Brahms and Sterndale Bennett—raised music to a high level of distinction and a broad level of participation beyond all other schools and, through his lifelong friendship with Josef Joachim, the greatest violinist of the age, he attracted many world-famous musicians to perform to and play alongside his boys. 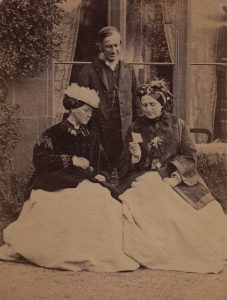 Anna Koch with Edward and Marie Thring; the sisters brought music to Uppingham from Bonn

Bernard Shore’s Introduction to Music in Schools, Ministry of Education Pamphlet No. 57 published in 1956, judged that “the unhappy divorce between music and the humanities that . . . continued, as far as England was concerned, until late in the nineteenth century, helped to banish music from most boys’ schools and degrade it to the level of an ‘accomplishment’ . . . for girls.” However, one boys’ school known to Shore, Her Majesty’s Inspector for Music, had healed that damaging separation in the 1850s by initiating “some of the most valuable ideas for the growth of school music.” That school was Uppingham. 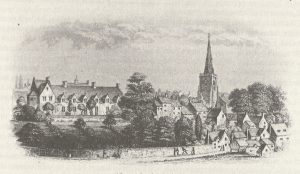 Uppingham School when Thring arrived in 1853

He continued: “Beginning with Uppingham, where Thring made history by appointing a Director of Music, several of the independent public schools had been developing their musical lives in a manner that differed considerably from what was possible at this period in schools supported or aided by the state. With larger financial resources, a more flexible school day, and teams of highly qualified specialist teachers, some of them men of outstanding personal qualities, they were able to build up musical traditions that included individual instrumental tuition, school orchestras, chamber music groups, house music competitions, and chapel services combining in a distinctive way collegiate with congregational singing. Most important of all, perhaps, they demonstrated that the classics of musical literature, if skilfully graded and presented, could make a strong and lasting appeal to the average boy.” 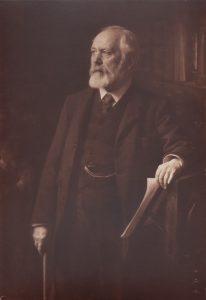 Shore was correct when he identified Uppingham as the initiator of “some of the most valuable ideas for the growth of school music.” Thring’s aim “to make music take a proper place in English education” was realised over the course of the fifty-five years from his arrival in 1853 and Paul David’s retirement in 1908.

Little has been written about how these schools, and Uppingham in particular, “saved music for the schools [through] the recognition of its educative values,” to borrow Shore’s words, other than Bernarr Rainbow’s essay “Music and the English Public School: Early History,” first published in 1990 and reprinted in 2015. A new essay examines the beginning of that salvation and reports on the consequences when “Thring made history.” 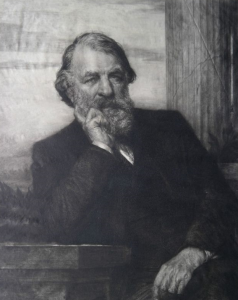 Uppingham was the first school to give music a prominent role in the curriculum, to appoint full-time expert musicians, and to give them remuneration and status on par with other teachers. As the school grew in numbers and reputation, so the team of music teachers expanded from one to seven, eventually to include the first woman on the teaching staff, and several gave their full working lives to the school. Most came from Prussia, were instilled in the tradition of Mendelssohn’s Conservatorium, and their proficiency allowed them to play alongside leading instrumentalists of the day. Those able in composition added to a repertoire of school songs and hymns. All pupils benefited from their work: in class teaching, congregational singing, instrumental lessons, choirs and choral societies, chamber groups and orchestras, and through exposure to the classics of European music and concerts by performers of international renown. 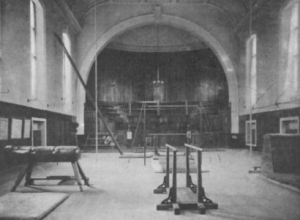 Joachim played at the inauguration of the David Concert Room in 1905; it doubled as a gymnasium

The full story, ‘From Prussia with Love: Music at Uppingham School, 1853–1908’, is based on material held in archives at Uppingham School, the Royal Academy of Music, the Bodleian Library, the City of Sheffield, the Pennsylvania State University, the City of Bonn and the Lese in Bonn; it has been published by the Journal of Historical Research in Music Education and can be accessed at https://doi.org/10.1177/1536600618784543

Malcolm Tozer taught at Uppingham School from 1966 until 1989 and served as a housemaster for fourteen years. For six years from 1989 he was Northamptonshire Grammar School’s first Headmaster and then Headmaster of Wellow House School for a further ten years. Since retiring in 2004, he has led inspections for the Independent Schools Inspectorate, served as a governor at Repton School and Foremarke Hall, and promoted partnerships in physical education and sport between state and independent schools. 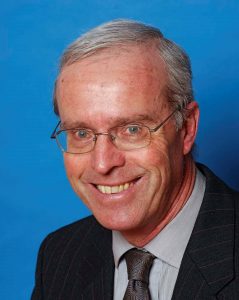