Writing in 1917, the president of the British Board of Education, H.A.L. Fisher, described the First World War as a ‘battle of brains’ in which universities had played a conspicuous role. The University at War 1914-25 attempts to answer the broad question of how universities dealt with the shock of total war during the 1914-1918 conflict. This is a complex question, involving analysis of institutions, individuals, disciplines, and national governments. The book draws on examples from three nations – Britain, France, and the United States – and demonstrates the ways in which universities and scholars engaged with the war from its outbreak in 1914 up to the middle of the 1920s. It adopts an approach which is transnational and comparative; the book argues that while there were significant national differences between universities in different countries which became apparent during the war, scholars and disciplines had collaborations and affinities that traversed national borders 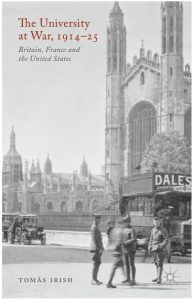 The University at War, 1914-25: Britain, France, and the United States (Basingstoke: Palgrave Macmillan 2015)

The book examines the ways in which intellect was mobilized during the war and argues that states were not prepared for this. From 1914, scholars sought to put themselves at the service of the state, but they mostly did this through their own initiatives, such as by giving lectures or writing pamphlets and books about the righteousness of their nation’s role in the war. By the middle of 1915, however, states began to realize that the conflict was greater than they had initially anticipated and, as such, the widespread mobilization of intellect was required to solve many war-related problems. Physicists and chemists were sought to apply their expertise to the science of warfare; sociologists and economists were mobilized to help run wartime economies; linguists proved invaluable as translators; historians and philosophers wrote propaganda. The greatest demonstration of the mobilization of intellect came at the war’s termination, when states brought teams of geographers, historians, and legal experts to the Paris Peace Conference to help redraw the map of Europe.

The mobilization of intellect hinged on the respective control of states over university education. In France, where the state was more involved in higher education, the process was relatively smooth. In Britain, where universities were autonomous in many cases, the process was much more problematic. The mobilization of intellect in wartime demonstrated the ways in which the war touched whole societies but it posed difficult questions for scholars who, in many cases, abandoned their critical faculty for the duration of the conflict.

Universities were transformed by war. Lecture theatres and laboratories were, in many cases, emptied of students during the conflict, with the vast majority of students in British and French universities being mobilized in the armed services. For intimate university communities, where students studied, lived, and socialized together, the effects of the war were profound. As the majority of university men were mobilized as junior officers in the army, they suffered a disproportionate death rate in the war. The Ecole Normale Supérieure in Paris suffered a death rate of 28% of all its students or alumni who were mobilized. For those still at home, wartime was a period of anxiety and grief.

A core argument of the book relates to the international world of academia. It has been well established that the outbreak of war in 1914 was catastrophic for the international community of scholars, which had become greatly interconnected in the preceding decades. The outbreak of war was deeply contentious and scholars on both sides began publishing manifestos and pamphlets to articulate the righteousness of their respective causes. The most infamous of these was the ‘Appeal to the Civilized World’ issued by 93 German intellectuals on 4 October 1914, which elicited a global response owing to its strident denials of German wrongdoing. Many scholars in allied nations like Britain and France ceased interactions with their erstwhile colleagues in Germany in this period with the exchange of students, professors, publications, and dissertations between universities in belligerent nations coming to an end. The majority of scholars in the United States, too, were moved by these debates to take sides and many supported the allied cause from 1914 even though America did not formally enter the war until 1917.

As the war progressed, and allied nations began cooperating in the military, political, and economic spheres, allied universities began to foster greater cooperation too. This became especially pronounced with the entry of the United States into the conflict in 1917. As allied nations looked to the end of the war and beyond, they saw an opportunity to exert greater influence on the post-war world and to usurp Germany’s traditional place as the leading international centre for universities and research. To do this, they created more links and exchanges between one another, seeking to make the movement of students and professors between allied nations easier and more frequent. In Britain, this led to the establishment of the PhD degree in 1918. Traditionally, researchers seeking to undertake graduate study would have to travel to Germany to do so. The institution of the PhD in Britain (and reforms to make research degrees more accessible in France) sought to challenge Germany’s international standing long after the war’s termination and to make wartime alliance permanent.

The war did not end for universities in 1918. For many academics involved, much bitterness continued into the post-war period, and relations with former belligerents remained strained. Many international organisations, such as the International Research Council (IRC), did not initially permit Germany to join, a situation that was resolved, in many cases, in 1926 following German entry into the League of Nations. The war continued in other ways: wartime controversies about the rights and wrongs of support for the conflict rumbled on in some common rooms and would rear their heads again in 1939. For those who had lost sons, husbands, or friends, the legacy of the war could last a lifetime; the many memorials that dot university buildings from the period are testament to this.